Oklahoma WR Marquise Brown to miss combine due to Lisfranc injury, per report

Oklahoma wide receiver Marquise Brown will not be able to work out at the NFL combine due to a Lisfranc injury, according to an ESPN report.

A projected first-round draft pick has been ruled out of competing in next week’s NFL scouting combine.

ESPN reported Monday that Oklahoma wide receiver Marquise Brown will not be able to participate in workouts prior to the draft after undergoing surgery to repair a Lisfranc injury early last month. Brown is expected to be healthy by the start of training camp, however, according to the report.

A 5-foot-10, 168-pound wideout from Florida, Brown was named a first-team All-America honoree by multiple outlets last season, including USA TODAY Sports. He was arguably the favorite target of Heisman Trophy-winning quarterback Kyler Murray, catching 75 passes for 1,318 yards and 10 touchdowns in 2018. 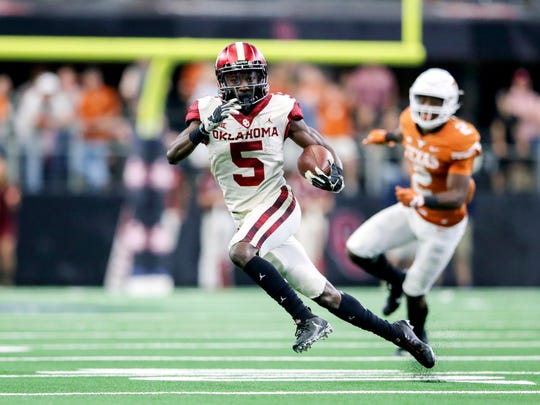 Brown, whose nickname is “Hollywood,” has been widely projected as a mid-to-late first-round pick in April’s draft. USA TODAY Sports had Brown being taken at No. 22 by the Ravens in its post-Super Bowl mock draft.

ESPN reported that Brown suffered the injury in the Big 12 title game and played through it in the Orange Bowl against Alabama.

Another projected first-round pick, Mississippi State defensive lineman Jeffery Simmons, will also miss the combine after confirming last week that he had torn the anterior cruciate ligament in one of his knees.

Cantlay shoots a 64 and moves up 43 spots