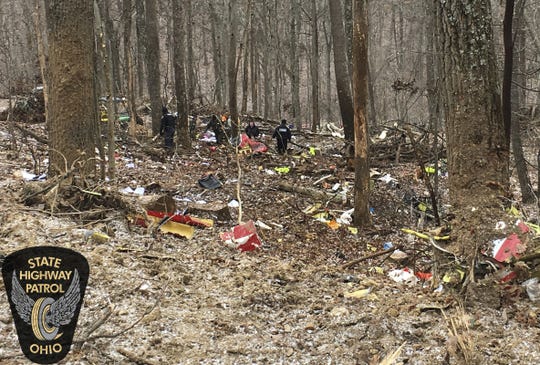 CINCINNATI — Poor weather conditions may have been a factor in the triple fatal medical helicopter crash late last month in Ohio, experts say.

Survival Flight Inc. accepted the flight and departed from Grove City for Holzer Meigs hospital in Pomeroy at 6:28 a.m., according to a preliminary report released this week by the National Transportation Safety Board.

Flight-tracking software showed the helicopter took a right turn then a “sharp left turn,” followed by an alarm, the report says.

At 7:20 a.m. on Jan. 29, communication was lost with the Bell 407 helicopter. Authorities found the wreckage about four miles northeast of Zaleski.

“One possibility for this would be that the helicopter ended up in the clouds,” said Gary C. Robb of Kansas City, Missouri, a helicopter crash attorney for three decades.

The three victims were all from Ohio: pilot Jennifer Topper, 34, of Sunbury and flight nurses Bradley Haynes, 48, of London and Rachel Cunningham, 33, of Galloway.

Their Bell 407 helicopter was flying under visual flight rules, the report states, as opposed to instrument flight rules.

The Federal Aviation Administration sets regulations governing visual flights. Among them: No flights are allowed if the cloud ceiling is within 800 feet of the ground, a rule Robb cited.

“That’s not a lot of margin for error,” he said.

“The assigned team’s pilot, working with … our aviation operator, determined that weather conditions at the time of request were below our program’s weather minimums,” said MedFlight President and CEO Tom Allenstein in a statement.

At 6:16 a.m., the emergency department issued another request, this one to HealthNet Aeromedical Services, another Survival Flight competitor.

“At 6:20 a.m., the Air Methods Corporation pilot assigned to that base declined to complete the flight due to atmospheric conditions which fell below published operational weather minimums,” the company said in a news release.

In addition to cloud level, the FAA lists visibility and terrain obstacles as factors to determine a flight’s viability.

The NTSB report says the Bell 407 wreckage was located on a “tree-covered hill” and “exhibited significant fragmentation.”

Survival Flight advertises its ability to fly in inclement weather when others won’t, raising safety concerns from experts.

“If other companies turn down the flight for weather – CALL US,” states a Survival Flight flyer shared by Robb with The Enquirer. 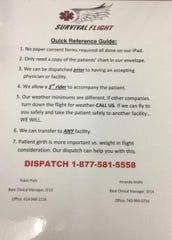 Andy Arthurs, the vice president of EMS services for Survival Flight, declined to answer questions about the flyer.

“Survival Flight is fully engaged and cooperating with multiple agencies in the ongoing investigation surrounding this crash,” he wrote by email. “As such we are unable to issue any comments at this time.”

However, he told The Columbus Dispatch that the flyer “doesn’t promote anything other than the truth.”

“It’s appalling to me,” Robb said of the flyer. “That is unacceptable to advertise on the basis that you are a higher risk-taker.”

He added the air medical industry is “revenue-driven” and “you don’t make revenue when the helicopter sits on the ground.”

A Holzer Meigs spokeswoman did not respond to questions from The Enquirer.

Matt Clarke, a Portland, Oregon-based attorney specializing in helicopter crashes, pointed to the FAA’s rules requiring that pilots conduct a pre-flight risk analysis before each flight.

The analysis must include assessing weather, crew fatigue and “a procedure for determining whether another helicopter air ambulance operator has refused or rejected a flight request.”

The flyer is “in contradiction with this regulation because the implication (of the pre-flight risk analysis rule) is if others turned down the flight, that is a factor that should weigh against taking the flight,” Clarke said.

He added weather can change quickly, but weather reports likely were not updated between Survival Flight accepting the flight and the other companies declining it because of the brief time frame.

Both Robb and Clarke acknowledged more details must emerge before the cause or causes of the crash are clear.