US Secretary of State Mike Pompeo was in the Slovak capital Bratislava on Tuesday, warning countries in Central and Eastern Europe to resist Chinese and Russian influence. (Feb. 12)
AP

WARSAW, Poland – Secretary of State Mike Pompeo told a U.S.-sponsored meeting on the Middle East taking place in Poland on Thursday that the world “can’t achieve peace and security” in that region without first “confronting Iran.”

Precisely how far the U.S. is willing to take this confrontation or details of its strategy for monitoring and keeping Iran in check remain unclear.

Pence spoke as Vice President Mike Pence and foreign ministers and delegates from more than 60 countries gathered in Poland’s capital for the summit. It has drawn rebuke for appearing to hone in on Iran while downplaying other regional actors.

The topics officially under discussion include Israeli-Palestinian peace, conflicts in Syria and Yemen, and the turbulent issue of Iran following President Donald Trump’s decision last year to withdraw from the 2015 nuclear deal between Tehran and world powers. Long-standing U.S. allies in Europe favor staying in the deal.

But Pompeo in Warsaw said “pushing back” against Iran was central to dealing with all the region’s other problems, a characterization that will do little to overturn perceptions the Trump administration is determined to see a new regime in Tehran, although Washington has consistently denied it is actively pursuing regime change.

The Trump administration, which re-imposed tough economic sanctions on Iran after its exit from the nuclear deal, accuses Iran of a range of destabilizing activities ranging from support for Shia militant groups in Lebanon, Syria and Yemen to the development of a ballistic missiles program. Washington does not believe that Iran has stopped enriching uranium for its nuclear weapons program despite repeated confirmation from international inspectors that it is abiding by the nuclear accord’s terms. 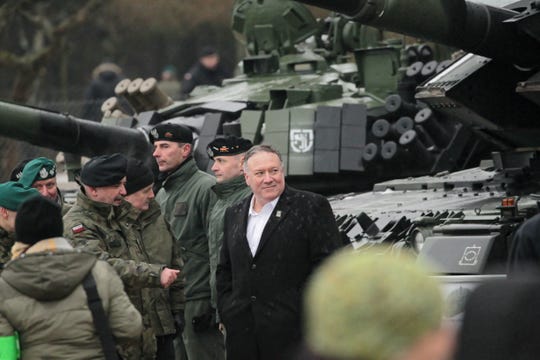 Secretary of State Mike Pompeo, center, visits NATO soldiers in Poland, on Feb. 13, 2019. Pompeo is in Poland for a summit on the Middle East. (Photo: EPA-EFE)

“Iran is a country you can’t rely on, do business with, can’t trust,” Trump’s lawyer, Rudy Giuliani, told USA TODAY on the sidelines of a rally in Warsaw organized by an exiled Iranian opposition group. The former New York mayor is not taking part in the summit, but his views reflect those of many in Trump’s inner circle, including National Security Adviser John Bolton, who has long advocated for an aggressive Iran approach.

“An uncontrolled and unintended collapse of the Iranian regime will further destabilize the Middle East and further push back the hopes and aspirations of the Iranian people for democracy and freedom,” Pooya Dayanim, an expert on Iran, wrote in a blog post this week for the Atlantic Council, a Washington-based think tank.

“However, Iranians revolted forty years ago and didn’t get the regime they were hoping for. If the Iranian people are to suffer through more sanctions or are to risk life and limb, they need to know why they are doing so and what future awaits them,” he wrote, referring to persistent suggestions from Iran hawks in Trump’s inner circle that Iran’s government is one major protest away from collapsing.

On Monday, Iran marked 40 years of its Islamic Republic.

Tehran has denounced the conference as an American anti-Iran “circus.” Russia and China are not attending and Federica Mogherini, the European Union’s foreign policy chief, is also skipping the event. Several high-profile Arab dignitaries are in Poland for the event, but Palestinians – not present – have called for it to be boycotted.

Pompeo’s comments echo saber-rattling remarks by Israel’s Prime Minister Benjamin Netanyahu, who drew scrutiny on Wednesday when he made clear the conference is centered on Iran despite the far broader published agenda.

In an interview with reporters on a Warsaw street, Netanyahu also appeared to say “war” with Iran was a common goal of the summit’s participants. Netanyahu used the Hebrew word “milchama,” or “war,” in his comments. His office later changed its translation and said he was referring to a “common interest of combatting Iran.”

Israel is Iran’s arch-enemy and Netanyahu has long advocated for a confrontational approach to Iran. However, he has stopped short of calling for war.

In his remarks, Pompeo said that “no one country will dominate the discussion today nor will any one issue dominate our talks. Everyone should speak thoughtfully and honestly. Each country should respect the voice of all others. Our hope is that every engagement will entail true back-and-forth dialogue, not just be a chance to recite prepared statements.” He added: “We want to bring together countries with an interest in stability to share their different views and break out of traditional thinking.” 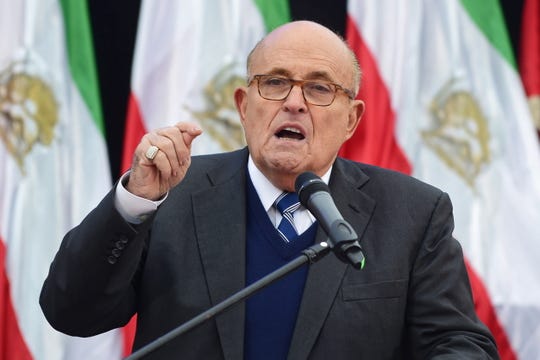 How much would it cost?