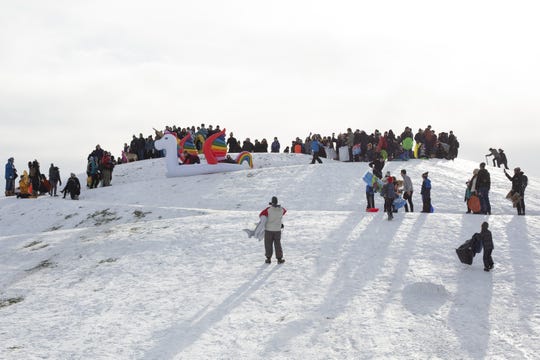 Hold on to your hats, Seattle – those warm, woolen hats: You are not out of the icebox yet.

After a weekend snowstorm pummeled the normally mild Northwestern city – making this month the city’s snowiest February since 1949, according to AccuWeather – another one-two punch is expected this week.

The next snowstorm is forecast to hit Sunday night, bringing 1-2 inches of snow, AccuWeather said, and another would pile on 3-6 inches Monday afternoon into Tuesday.

The snow will ride a wave of record cold: High temperatures were expected in the upper 20s to low 30s, with wind chills from 17 to 22 degrees.

The brutal weather has already wreaked havoc on a city more accustomed to the wet stuff than the white stuff. Seattle normally averages only 0.7 inch of snow each February.

“This February in Seattle is going to be remembered for brutal winter weather for many folks not used to it,” Weather.us meteorologist Ryan Maue said.

The first weekend storm, which brought 6-10 inches of snow to the area, emptied grocery story shelves, shuttered schools and made travel treacherous. Portland, Oregon, was also hit with 4 inches of snow.

About 400 flights were canceled at Seattle-Tacoma and Portland international airports over the weekend. A 20-mile stretch of Interstate 90 in central Washington was shut down because of snowdrifts amid blizzard conditions. About 50,000 people lost power.

The new storms would not just be limited to Seattle, AccuWeather forecasters said, but would also target Portland, Bend and Pendleton, Oregon; and Yakima and Spokane, Washington.

Here are four scenes in Northeast Seattle on Sunday as the city braces for the next rounds of snowfall @brendankiley reports https://t.co/VSPZNmsAvqpic.twitter.com/yedsZbdhPH

Washington Gov. Jay Inslee declared a state of emergency in advance of the fierce weather on Friday. He joined local officials encouraging people to stay off the roads and to check on the elderly and vulnerable.

A man, 59, who may have been homeless was found dead from exposure Thursday near a train platform at a light rail station, the Seattle Times reported. Emergency shelters prepped more beds and outreach workers targeted the city’s hundreds of unsanctioned tent camps, the paper said.

The unusual weather was not all doom and gloom for some in the Pacific Northwest. During a break between storms, some Seattle residents flocked to neighborhood hills with skis, sleds, laundry baskets – and even a kayak.

“It’s just a wonderful community getting out here together in the snow. Great that we live by the school here with the hill,” Tony Muhlenkamp told KOMO-TV on Saturday.