SportsPulse: USA TODAY Sports’ Scott Gleeson tells us which freshman to keep an eye on as the beginning of the college inches closer.
USA TODAY

DURHAM, N.C. – Pick a viral clip of Duke’s Zion Williamson. The 360-degree slam vs. Clemson with his face eye-level with the rim; hitting his head on the backboard trying to block a shot vs. Princeton; the high-flying, two-handed alley-oop vs. Eastern Michigan; the one-handed slam with a Virginia defender hacking his dunking arm preceded by a nifty crossover dribble between defenders.

The Legend of Zion grows with each game.

What will he do next? Tune in to see.

The No. 2 Blue Devils, who have dropped just two games, including Williamson and a group of talented freshmen have become appointment viewing. And their next game should be a doozy: a rematch with No. 3 Virginia, a team they handed its only loss, last month in Cameron Indoor Stadium. (Saturday, 6 p.m. ET, ESPN)

Williamson, with his rare combination of size, strength, speed and skill packed into a 6-foot-7, 285-pound frame, has captured the attention of college basketball and captivated NBA executives.

“There’s never been a player like him to play basketball,” ESPN analyst Jay Bilas told USA TODAY Sports. “Not to say he’s the best player I’ve ever seen, but I’ve never seen anyone like him, I know that. All you have to do is watch him to know that this guy is different.”

Bilas, who played for Duke, might be biased. But he’s not wrong. Williamson is the size of a nose tackle with a linebacker’s physique combined with a defensive end’s speed. LeBron James plus J.J. Watt equals Zion Williamson, who does things with the basketball that seem incongruent to his size.

His performances reverberate throughout college basketball and the shock waves are felt in the NBA, where #tryinforzion is the hashtag for teams at the bottom of the standings.

All four could get selected in the first round of the June draft, and Williamson and Barrett are 1-2 in most mock drafts. If that scouting holds, it would make them the first pair from the same school drafted 1-2 since Kentucky’s Anthony Davis and Michael Kidd-Gilchrist in 2012.

Williamson, Barrett and Reddish are projected to go top 10, which would make them just the second trio from the same school to go in the first 10 selections since 1966. They could go 1-2-3, which has never happened for three players from the same school.

Two NBA executives from the same team sat in the stands watching Duke play an early-season game. They represented a team trying to make the playoffs this season, but one executive looked at his colleague after watching Williamson, Barrett and Reddish and wondered if they were doing the right thing by winning games. Maybe tanking to get one of those players would be the better long-term play.

No freshmen class has dominated the college basketball conversation since Michigan’s Fab Five in 1991-92 or perhaps Kentucky’s 2009-10 team with John Wall, DeMarcus Cousins and Eric Bledsoe. Michigan played in the NCAA title game and Kentucky lost in the regional finals.

There’s no guarantee the Blue Devils will win the title, but as Bilas noted, “You can be the best team and not win the thing. … But it’s going to take an extraordinary game to beat these guys. If Duke plays its best in any given game, they don’t lose to anybody.”

Come for Williamson’s rim-rattling dunks; with 47, every fourth Williamson basket is a dunk. But stay for his all-around game. It’s an impressive and unique display of physique and skill.

His player efficiency rating – a measurement of a player’s positive and negative actions on the court – is 42.5, the highest of any player since College Basketball Reference began tracking the stat in 2009-10.

On the data-driven news site fivethiryeight.com, a story called Williamson the best college basketball player in at least a decade.

ESPN’s Dick Vitale bellowed, “I have never, ever witnessed a player with that kind of mobility and agility with that physicality. This is a special player.”

If Williamson was worried about the switch from high school to college, it disappeared quickly. He had 28 points and seven rebounds against Kentucky in his first game.

“There were a couple of times when I thought I was struggling and Coach K told me to be me, be myself and just play my game,” Williamson said. “Once he told me that, the transition became so much easier.”

“He’s a treasure. He’s a beautiful kid to coach,” Krzyzewski said. “Every day he’s upbeat, team-oriented. He’s funny. He’s been parented well. Great family. Coached well. He’s a great kid. Everybody on our team loves him, and he’s got a great sense of humor and a little bop when he’s making jokes.

“As unique as he is as a player, he’s unique in that way as a person. He’s the total package. There’s no question about it. Big-time great kid and player.” 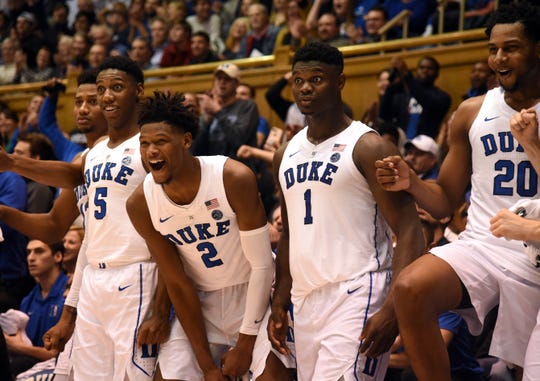 Williamson, Barrett, Reddish and Jones are comfortable in the spotlight. In the locker room postgame, Barrett and Williamson have a running joke. Williamson asks Barrett to grade his dunks.

Barrett suggested he might give out a 10 if Williamson threw down a between-the-legs dunk. They’re clearly having fun.

Williamson drops in the occasional “sir” when talking to reporters and hints that some colleges, including Clemson, may have tried to tempt him with the idea of playing football.

He grew up in the social media era – Williamson has 2.3 million Instagram followers – and understands the attention is just part of the process.

“My parents, when they were training me as I was getting older,” Williamson said, “they always told me, ‘If you want to be a professional athlete, being in a spotlight is going to come with it, so you have to be mentally prepared for it. If you’re not mentally prepared for it, being a professional athlete’s just not for you.’ You have to be able to take all the positive hits, all the negative hits.”

While Williamson attracts so much attention, Barrett is one of the sport’s top scorers. He has four 30-point games this season, including 33 in his college debut against Kentucky, 32 on the road against Florida State and 30 against Virginia.

The NBA team with the No. 1 overall pick will give Barrett serious consideration. Scouts and executives love his potential as a game-changing scorer and facilitator.

Barrett, whose father Rowan was a star in Canada and played at St. John’s then professionally overseas, is used to the spotlight. He played on Canada’s national team as an 18-year-old last summer and is considered the best prospect to emerge from Canada.

Reddish is coming around offensively: 23 points, including the game-winning 3-pointer at the buzzer against Florida State and 24 points against Boston College. His ability at 6-8 to hit threes entices NBA scouts.

Jones is the younger brother of Minnesota Timberwolves point guard Tyus Jones, who also attended Duke. He’s been playing against NBA-caliber players for a few years now and is one of the best on-ball point guard defenders in the nation. He also knows how to run an offense.

Bilas said Krzyzewski enjoys this group of freshmen because of their maturity and seflessness.

“They gave themselves up to the group straightaway from day one,” junior captain Jack White said. “It’s a credit to them and their families and everything they’ve gone through to come to a place like this. Obviously, it’s different. For them to be mature enough and to be all about winning and to be so easy-going and easy to get along with the existing group we had coming back, it’s been amazing.”

Pompeo visit to focus on U.S. concerns over Huawei in central Europe

Qualifiers for the 2019 Masters