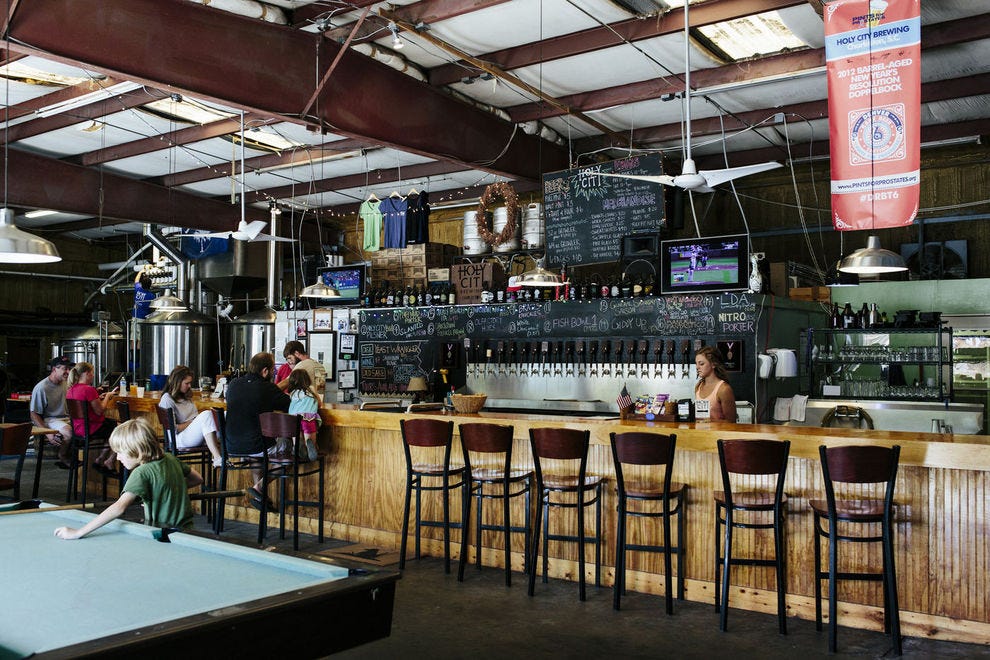 Move over, mint juleps – the craft beer scene in Charleston, S.C. is making a name for itself in the best ways possible.

Although beer has technically been “brewing” in the Holy City since 1732, it’s only within the past twelve years that small-scale breweries have been able to make a name for themselves. That’s because prior to 2007, a ban existed on high gravity beer in the state, which placed a 6 percent alcohol-by-volume cap on beer.

So what sets Charleston breweries apart from the rest? The sudsy floodgates may have swiftly opened, and while a few breweries distribute their products out of the Palmetto State, most Charleston brewmasters are keeping things local to ensure that only the highest quality of craft beer product is produced.

Be on the lookout for these taps, cans and bottles the next time you’re having a night out in Charleston. Or better yet, visit the breweries in person for a truly crafted take on Southern hospitality. Here are 10 of the best breweries on the Charleston peninsula and beyond. 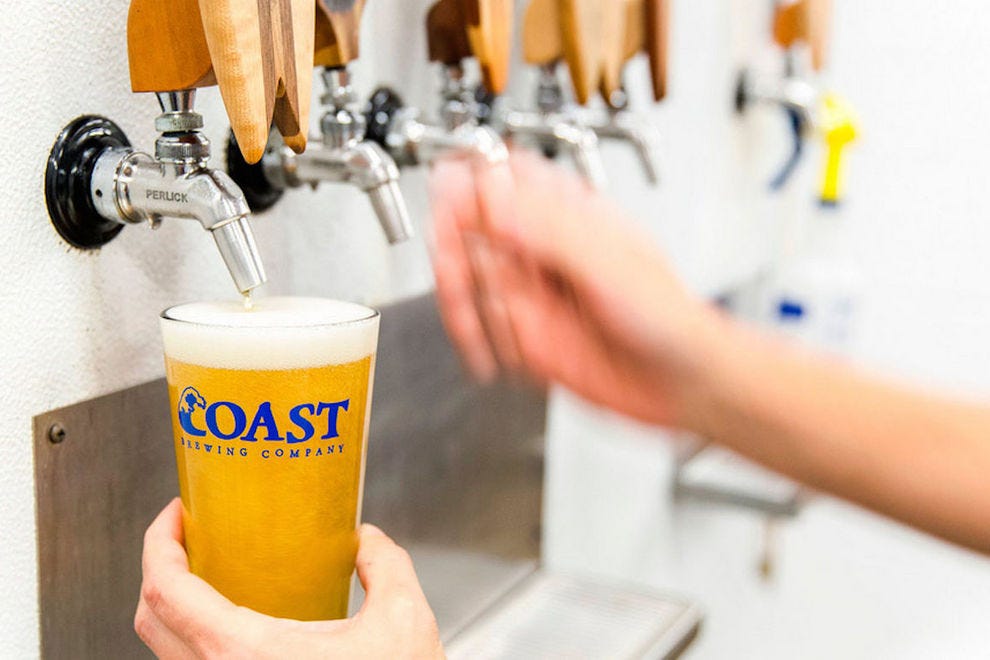 Jaime Tenny, the “other half of COAST,” is a prominent figure in the Charleston craft beer industry – her group, Pop the Cap SC (now called the South Carolina Brewers Guild), was integral in lifting the ban on high gravity beer in the state.

“If it didn’t pass, we were going to move to North Carolina to open the brewery,” she says. “It was a long time coming.” She and her husband, David Merritt, opened the doors of COAST Brewing Company in 2007, and have been serving up craft brews to the Charleston community ever since.

COAST keeps things simple, with their tasting room open Thursdays, Fridays and Saturdays. Aside from their long-standing reputation in the world of South Carolina craft beer, locals and visitors keep coming back for the quality products they’ve produced for over a decade.

Try their 32/50 Kölsch, their take on a Kölsch-style ale that is “soft on the palate with a delicate malt flavor,” a pint of Boy King IPA, which uses Citra hops, or their HopArt IPA, brewed all year.

Located northward on the Charleston Peninsula is Westbrook Brewing Co. Their One Claw pale ale, a “rye pale ale made with a heavy handful of malted rye” and one of their favorite hop varieties, is available all year-round, as is their White Thai Southeast Asian-inspired beer, featuring “fresh lemongrass, ginger root, and a dash of Sorachi Ace hops.”

Visitors can take a tour of the brewery for free, enhancing their experience and truly showcasing the unique process of how Westbrook brews get made.

If barrel-aged beers are your thing, time your visit to Charleston wisely – Westbrook’s Mexican Cake beer, a barrel-aged Imperial Stout commemorating the brewery’s opening, is only released once a year around August or September (check their Facebook page for official release dates). Westbrook beers have also become so popular that the brewery distributes beyond the Palmetto State. You can find their products in North Carolina, Georgia, Alabama, New York, Colorado and even Denmark. 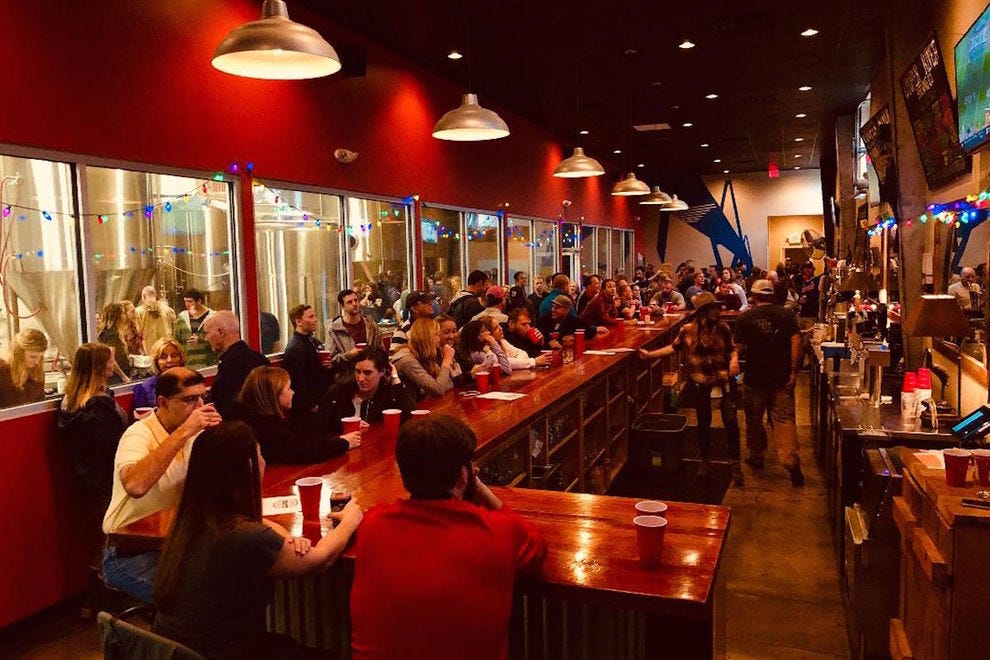 The folks at the Cooper River Brewing Company have been serving up fresh, craft brews to locals and visitors at their renovated warehouse since 2015.

“When we opened our doors, we were the third brewery on the Charleston Peninsula,” says founder Jamie Martin. “Our plan was to use our head brewer’s experience of brewing ales…to make unique European ales in a traditional, time-honored manner.”

The taproom takes the guesswork out of confusing naming conventions that sometimes come with craft breweries. Their Cooper River Brewing Golden Ale is perfect on a hot and hazy day, and if you’re in town at the right time, you can catch a seasonal offering (like their Pecan Tan, made with South Carolina pecans).

One-third of their 7,500-square-foot warehouse is dedicated to their public area, where visitors can have a beer while watching the brewing in real time, behind a wall of windows. 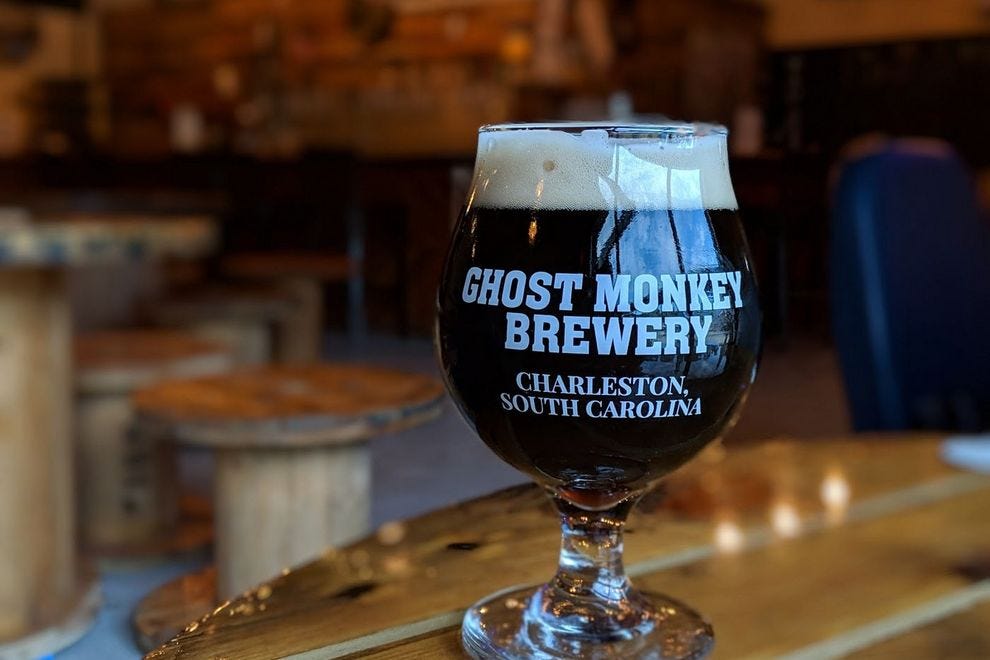 Sip on a Vanilla Thrilla Porter and ask cofounder Josh Parker how the brewery got its name — Photo courtesy of John Kosky, Ghost Monkey Brewery

As the craft beer scene in Charleston grew, partners John Kosky, Jim Leonard and Josh Parker recognized that the Mount Pleasant area needed some breweries of their own. Enter Ghost Monkey Brewery, a nano-brewery that opened in 2016.

Popular beers include Yoga Pants (their American take on a German-style Kölsch, which pairs well after a Saturday morning onsite yoga session) and their Lemon Basil IPA (a basil-forward IPA, heavily hopped with Sorachi Ace and lemon). The brewery is beginning to distribute kegs around the city of Charleston, but the best experience is had at Ghost Monkey’s taproom.

As for the brewery’s name, the backstory is worth a sip for sure. According to Kosky, “Josh Parker took a business trip to Spain and visited Gibraltar. While gazing over the scene, a monkey appeared out of nowhere, like a ghost, and snatched Josh’s newly acquired souvenirs.” Monkeys might have a tough time here, but the brewery otherwise welcomes leashed pets. 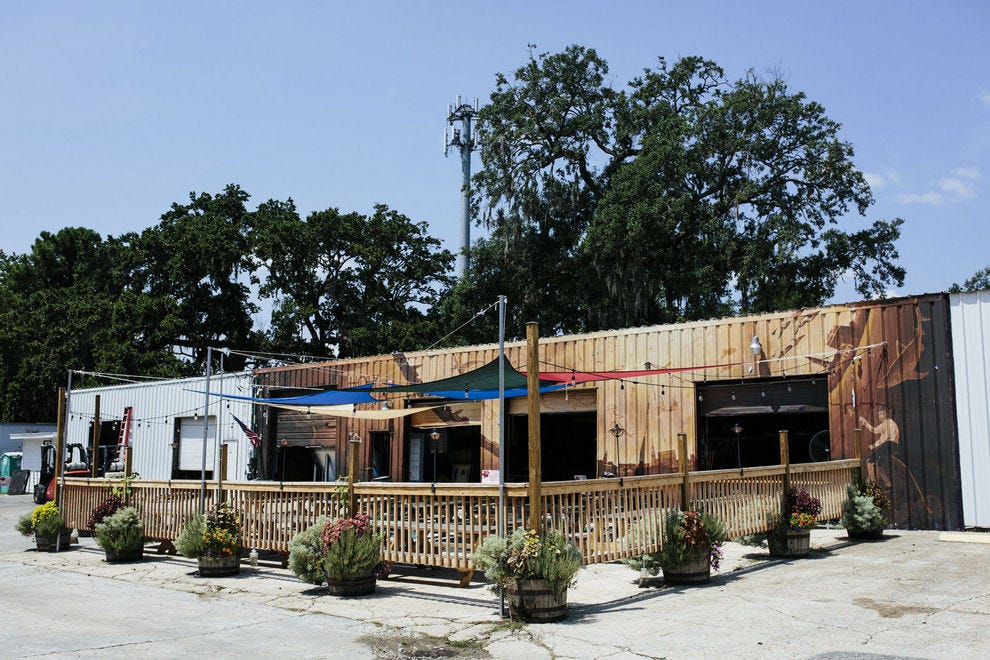 If you’re looking for a brewery that truly devotes itself to the city of Charleston, head to Holy City Brewing in North Charleston. The fourth brewery to open in the city, they’ve been serving up tasty favorites inspired by – and named after –unique elements of Charleston since 2011.

One of their best sellers, Pluff Mud Porter, gets its name from the oozy, fragrant, quick-sand-like mud found in Charleston’s creeks and bays. Their Overly Friendly IPA is based on Southern hospitality; according to their website, “It doesn’t matter if you’re a visitor to our fair city or you came from down the road to grab a pint, we’re always happy to see you. We live in a paradisal coastal city, so why wouldn’t we be?”

Local eccentricities aside, Holy City Brewing is all about making their tasting room feel like an everlasting part of their community. “We are one of the few breweries in town with a full kitchen,” says Chris Brown, owner and production manager of the brewery.

After munching on a Holy City Burger (made with pimento cheese, pretzel-crusted, pickled-fried green tomato, bacon, lettuce, and house remoulade on potato bun), stick around to play some trivia. Or listen to live music, the lineup of which is posted on their schedule each week. 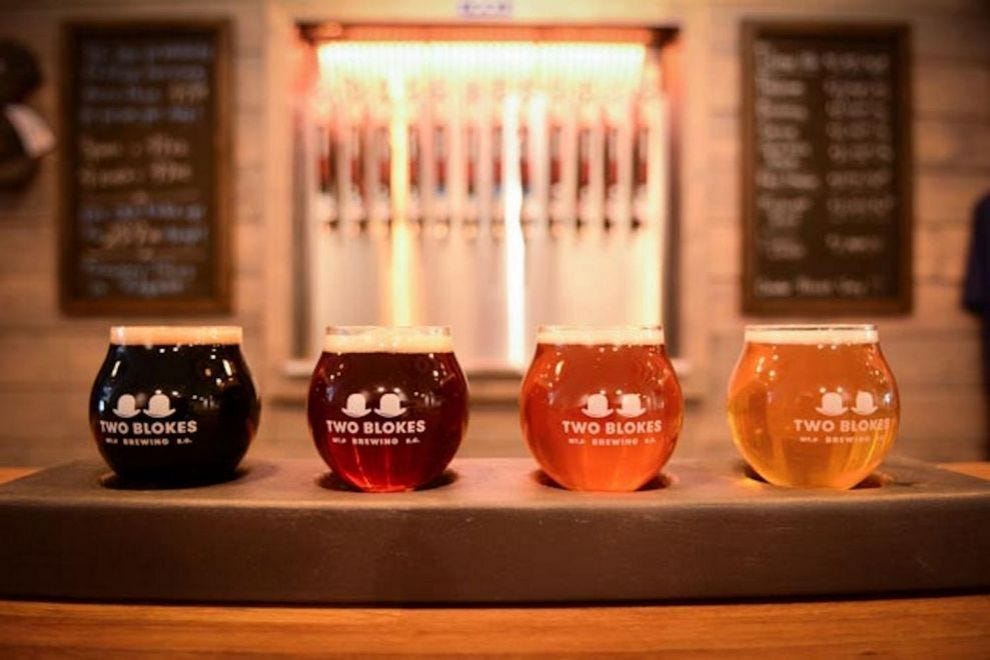 Charleston’s offbeat beer laws didn’t hinder the brains behind Two Blokes Brewing, located in Mount Pleasant. According to Matty Symons, head brewer and owner, “Before we opened, there were other laws passed that made it possible for us to have a viable business. Most critically, in 2013 the Pint Law was passed. Visitors to breweries were now allowed to taste up to 48 oz, or 3 pints, of beer per visit. This meant that we could open a taproom and sell our beer directly to consumers.”

That taproom, now run by Symons and co-founder Evelyn Kofler, has been open since 2016, and has brought some worldly charm to the area. Symons himself is Australian, and sources hops and grains from around the world.

“A Throat Charmer is an Australian term for a beer,” Symons adds, which was the inspiration for the brewery’s Wicked Throat Charmer, a New England IPA. Their Publican Pub ale is also a favorite, bringing a taste of England to the Southeastern United States.

Families will be happy to know that kids are welcome and even have their own Half Pints Kids Club area to enjoy onsite.

Run by a group of friends with a passion for craft beer and the Charleston community, the partners of Twisted Cypress Brewing Co. opened the first West Ashley brewery in 2017, at the site of a renovated Moose Lodge. Today, the team currently brews double batches on a half barrel system, which can be seen during the tours they offer.

Afterward, enjoy a Dark Harbor Black IPA, or a pint of Coastal Wheat in their taproom. Friendly dogs are always welcome, especially in their green space area, and creative types will enjoy their “Paint A Growler” events.

On the subject of Charleston’s beer ban history, “We were happy to see the ban on high gravity beers lifted. The higher gravities allow for much more creativity and flavor development,” says partner Tyler Eisenhart.

Those unsure about how to navigate the high gravity beer waters will appreciate what Twisted Cypress Brewing Co. has to offer. “You may notice that most of our beers are just above the previous restriction level,” Eisenhart adds. “This leaves us in a place to offer great smooth beers that aren’t just for sipping.” 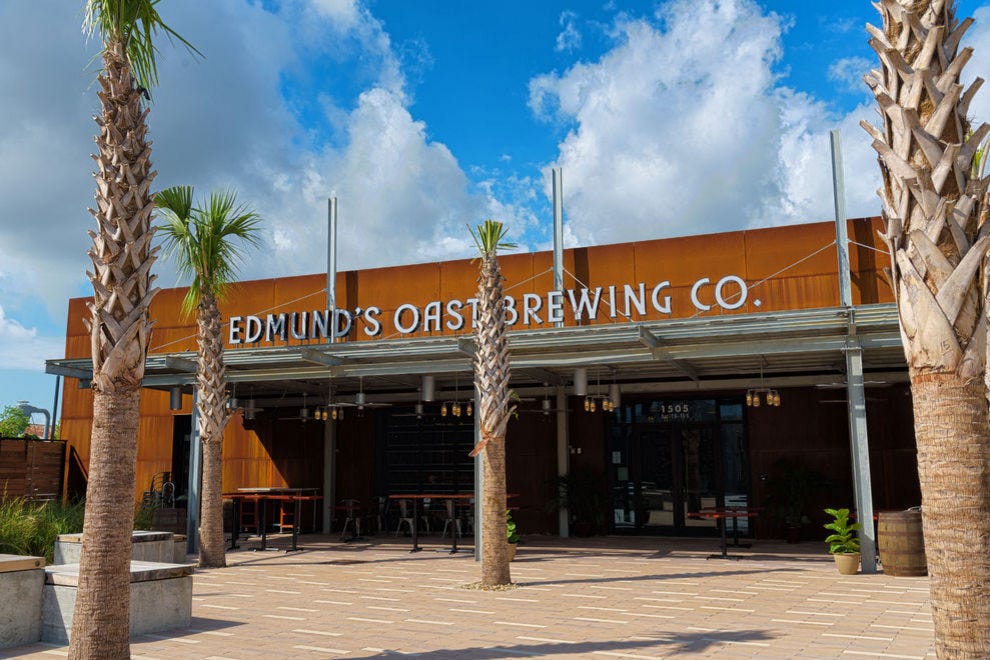 Edmund’s Oast Brewing Co. seems to have developed in reverse – previously, the company had operated as a craft beer store, and opened a popular restaurant on the Charleston Peninsula (also named Edmund’s Oast). “Charleston is into all things delicious when it comes to food and drink,” says Brandon Plyler, beer buyer, educator and South Carolina’s first Advanced Cicerone®. “We wanted to stay with our fans in the market that helped grow our footprint.”

Today, the brewery found on King Street stands out for a few reasons. The brewing team aims to produce a variety of beer styles in all ranges of strength, including their Lord Proprietor’s, an English Dark Mild beer made with tea grown in Charleston.

Because of its culinary connection and Polish smokehouse inspiration, Edmund’s Oast Brewing Co. has an in-house charcuterie program featuring fresh, homemade cured meats and their signature hot dog. Programming is a mix of mellow (live music from local bands), informative (culinary pop-ups and workshops), and exceptional (interactive Drag Show brunches are hosted every third Sunday of each month).

“We have 24 taps in our Beer Education Outreach Center, with a goal of making sure anyone who is willing to try something new can find a beer style they will enjoy and return to,” says Chris Winn, co-owner and “Chief High-Five Officer” of Tradesman Brewing Co.

The first brewery to open on James Island, their new location closer to downtown is certainly popular with the locals. According to Winn, their Welders Agave Wheat and Circuit Breaker IPA are hot sellers, and, when in season, their beet and ginger beer Transmission Fluid is “hard to keep in stock.”

Tradesman Brewing Co. likes to keep things small, distributing their beers throughout the local area in an effort to ensure the most quality beers are produced. Visitors can take part in bicycle group rides, charity benefits every week, and sample snacks from a rotation of stellar food trucks as well.

True beer enthusiasts can join their Union Club, which offers members the chance to mingle over pre-release brews, discuss upcoming events and some killer merchandise perks. 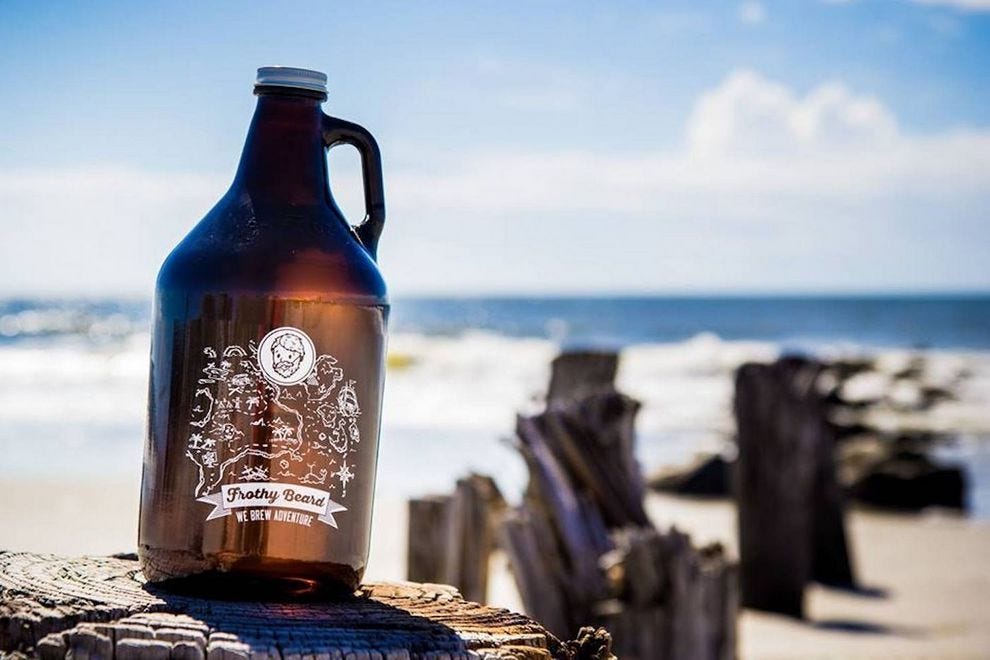 According to their website, “Frothy Beard Brewing Company grew out of a passion for creativity, culinary arts, zombies, epic novels, board games, the outdoors, and beer.” Most of those characteristics are still present at their West Ashley location, large enough for them to regularly host beer enthusiasts, axe throwing on Tuesdays, and increase their brewing capacity by more than 400% overall.

“Our brewery is unique because of its laid-back vibe,” says Michael Biondi, one of the beards behind the beers. “We make great, easy drinking beers across the board that can appeal to almost anyone.”

They serve over 20 beers at any given time, including their !Andale’! Pale Ale (made with jalapeño and cilantro), but regulars truly enjoy some of the quirkier offerings, such as the Bustin’ Makes Me Feel Good, a Marshmallow Milkshake IPA nod to Ghostbusters. Hungry visitors can chow down on a hot slice from Zombie Bob’s Pizza, a brewery partnership serving up pizza’s with a crust made from Frothy Beard’s Back From the Dead Porter.

Are passengers to blame for poor airline service?

LGBT sites where history was made