Ronan Farrow is accustomed to reporting bombshell claims about people in power, but his latest shocker has to do with the issues he’s faced while doing so.

Farrow said Thursday via Twitter that he and “at least one other prominent journalist” received threats from the National Enquirer’s parent company, American Media Inc., after reporting on the tabloid’s relationship with President Donald Trump.

Farrow’s allegations came in response to a post Amazon’s Jeff Bezos wrote, in which he accused the National Enquirer of trying to blackmail and extort him with threats to publish intimate photos unless he stopped investigating the publication. 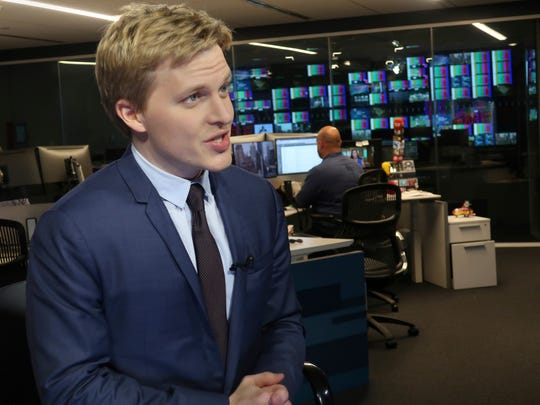 Bezos, who also owns The Washington Post and is also the world’s richest person, started investigating the tabloid after it ran a story that revealed his relationship with former TV anchor Lauren Sanchez.

Farrow tweeted: “I and at least one other prominent journalist involved in breaking stories about the National Enquirer’s arrangement with Trump fielded similar ‘stop digging or we’ll ruin you’ blackmail efforts from AMI.”

Farrow said in the tweet that he “did not engage as I don’t cut deals with subjects of ongoing reporting.”

I and at least one other prominent journalist involved in breaking stories about the National Enquirer’s arrangement with Trump fielded similar “stop digging or we’ll ruin you” blackmail efforts from AMI. (I did not engage as I don’t cut deals with subjects of ongoing reporting.) https://t.co/kHQdWIkVjV

“American Media believes fervently that it acted lawfully in the reporting of the story of Mr. Bezos,” the company said in the statement. “Further, at the time of the recent allegations made by Mr. Bezos, it was in good faith negotiations to resolve all matters with him.

“Nonetheless, in light of the nature of the allegations published by Mr. Bezos, the Board has convened and determined that it should promptly and thoroughly investigate the claims,” the statement reads. “Upon completion of that investigation, the Board will take whatever appropriate action is necessary.”

AMI did not immediately return a message from USA TODAY about Farrow’s allegations. Farrow declined to comment further.

Farrow has reported on stories for the New Yorker about AMI’s reported cover-up of a claim from a Trump Organization doorman with information about an alleged Trump affair resulting in a child, as well as about the National Enquirer’s relationship with movie mogul Harvey Weinstein.

In December, the Washington Post reported that AMI admitted to paying hush money to Karen McDougal, who alleged an affair with Trump, in order to “suppress the woman’s story” and “prevent it from influencing the [2016] election.”

Farrow is also the journalist who wrote a bombshell New Yorker story detailing decades of sexual abuse allegations against Weinstein. He also reported on allegations of misconduct relating to former CBS boss Les Moonves, which eventually led to Moonves’ ouster.

As awards race heats up, molten metal is forged into BAFTA statues

Is the Shower Toga all wet?

Marsai Martin, 14, remembers how ‘chillax’ her pitch was