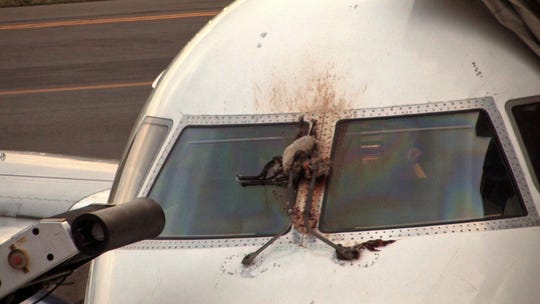 A Canada goose is stuck on the windshield of a JetBlue plane that made an emergency landing April 24, 2012, at the Westchester County Airport in Purchase, N.Y. (Photo: Matthew Brown, Westchester (N.Y.) Journal News)

Ten years after a collision with Canada geese forced airline pilot Chesley “Sully” Sullenberger to make his dramatic emergency landing on the Hudson River, pilots and airports report as many bird strikes as ever.

Civilian flights based in the USA reported 14,661 collisions with wildlife in 2018, a USA TODAY analysis of Federal Aviation Administration data shows. That’s more than 40 a day, tying the previous year’s record.

The strikes have been blamed in more than 106 civilian deaths worldwide over the past two decades, according to British and Canadian researchers. They cause about $1.2 billion a year in damage.

Why so many collisions? Analysts cite several factors: an increase in flights; changing migratory patterns; bigger, faster, quieter turbofan-powered aircraft, which give birds less time to get out of the way.

One of the biggest factors might be better reporting. The FAA has worked to improve the voluntary reporting system since Sullenberger guided U.S. Airways Flight 1549 – and all of its 155 passengers – to safety after a flock of geese took out both engines in 2009.

“That number has certainly been steadily increasing ever since the ‘Miracle on the Hudson,’ ” says Chris Oswald, vice president of the Airports Council International-North America. “A lot of that – and I can only say a lot because it’s hard to know – has to do with outreach activities.”

He says the industry is concerned that a change in bird populations – and especially a boom in larger species – could pose a continued danger to aircraft.

Biologists and aviation safety officials are engaged in a never-ending cat-and-mouse game in an effort to shoo, move or kill birds in the nation’s flight paths.

FAA reports show how disruptive – and potentially dangerous – bird strikes can be:

► On Dec. 22, a Republic Airlines flight to Minneapolis hit what the pilot said looked like a hawk while taking off from George Bush Intercontinental Airport in Houston. Five engine blades were damaged, causing the plane to vibrate and the pilot to make an emergency landing. Blood was found in the engine, but the bird’s remains were never found.

► The Monday after Thanksgiving, a JetBlue flight in Portland, Oregon, hit a Canada goose just after liftoff. Crew and passengers felt the impact and heard a loud thud, but the pilot thought it was a blown tire. After circling the airport and burning fuel for 30 minutes, the crew saw the tires were intact but the flaps were damaged. They landed and discovered a 6- to 8-inch hole in the right flap and a 12-inch dent in the engine.

► The previous day, airport operations crew in San Francisco heard a loud boom just before an EVA Air flight to Taiwan reported an engine failure. The Boeing 777 dumped more than 36,000 gallons of fuel and made an emergency landing. The suspect was a blue heron; the airline sent bird remains to the Smithsonian Institution for testing.

The Smithsonian’s Feather Identification Lab is a sort of “CSI for birds.” It analyzes bird remains known as “snarge” – military slang for “snot garbage” – through feathers and DNA testing.

Those results can tell an important story.

In Kansas City, for example, they show that most bird strikes involve species such as swallows and meadowlarks – birds that feed on Japanese beetles, which have been a growing infestation in Kansas City in recent years.

As a percentage of flights, no airport had more bird strikes last year than Kansas City International Airport, where the number has doubled since 2016. Most strikes occurred during the summer months, when the beetles abound.

Adding to the jeopardy: The airport built on farmland, and it sits along the Mississippi flyway, a major migratory corridor.

“KCI takes all wildlife management very seriously, especially in light of the unique challenges presented by our location and the amount of land we manage,” operations manager Bob Johnson said in a statement to USA TODAY. “Bird strikes are of particular concern, and that is why we have adopted the 100 percent reporting policy that is above and beyond what is required by the FAA.”

Johnson said the airport has worked to reduce bird habitats around the airport by substituting cattle grazing for grain crops, reducing the pooling of rainwater, and cutting down 50 acres of trees that housed nests.

Travis DeVault works as a biologist for the U.S. Department of Agriculture’s Animal and Plant Health Inspection Service. “Really, the bedrock of wildlife management at airports is habitat management,” he says. “And that means eliminating three things: food, water and cover.”

Airports harass birds with noisemakers or fake predators, but birds can get acclimated to those attempts and return once they learn the harassment isn’t a threat.

In extreme cases, airports cull the population by shooting the birds.

DeVault and others have been working on other measures – especially those that would reduce the growing number of bird strikes miles away from airports.

By analyzing the carcasses of 92 birds hit by airplanes at John F. Kennedy International Airport in New York, DeVault and other scientists were able to determine that most of them were flying away from the plane – but not fast enough.

DeVault wants to give them an earlier warning, using aircraft lights. He’s conducting tests to determine the bandwidths and flicker rates that will be visible to the broadest range of birds.

“We’re trying to give the birds a little more time to get our of the way, and we’re trying to do that with aircraft lighting,” he says. “But it has to be tuned to the visual capability of birds.”

Other researchers analyze bird flight patterns and avian radar to give air traffic controllers and pilots more information about where the birds are in real time.

Bird strikes are about 98 percent of wildlife strikes reported to federal officials, but the database includes hundreds of contacts with other animals, usually at smaller airports.

In Florida, it’s not unheard of for a plane on the runway to encounter an alligator.

Problems are usually solved with better fencing, but birds can’t be fenced out and are likely to be a problem as long as airplanes share the skies with them.

After all, the first-ever reported bird strike came from Orville Wright himself. He hit a red-winged blackbird over a cornfield outside Dayton, Ohio, in 1905.

“It’s not something you can build out of,” Oswald says. “It’s never going away entirely.”

Do we need a remake of the Mel Gibson rom-com?